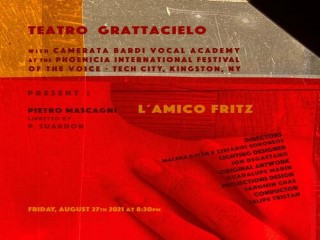 General Director Stefanos Koroneos and Teatro Grattacielo will share their award-winning 90-minute version of Mascagni’s L’amico Fritz. The production is incredibly innovative as specially designed projections will be used as both backdrop and scenery. The projections in this production are a combination of artwork and live feed.

Mascagni wrote L’amico Fritz in 1891 as an attempt to avoid being stereotyped as a violent realist after the success of Cavalleria rusticana the previous year. Yet in so doing, he produced a work that can be dismissed as slight. An exercise in pastoral, the opera is set in pre-Franco-Prussian war Alsace, where Protestant and Jewish communities coexist in gentle harmony, and where bachelor landowner Fritz, with a bit of help from David, the local rabbi, gradually falls in love with Suzel, the daughter of one of his tenants. This production will be directed by Malena Dayen and Stefanos Koroneos with projection artwork design by Lupe Marin, lighting by Jon DeGaetano, and conducted by Felipe Tristan. Sangmin Chae will be the live feed and projections manager.

PHOENICIA INTERNATIONAL FESTIVAL OF THE VOICE: "PAGLIACCI" BY LEONCAVALLO

Leoncavallo’s Pagliacci was premiered in Milan in 1892. However, while traditionally set in that time period and in Calabria, the story is timeless - wanderlust, jealousy, intrigue, revenge, and the tragic outworking of human frailty. Maria Todaro’s production will be fully updated and replete with modern touches - cars, trucks, cellphones, and an appearance by remarkable circus performers.

The actor, Tonio, delivers a prologue explaining to the audience that though they will be play-acting, the actors are made of flesh and bone, and, just like the audience, suffer the same difficulties in their private lives. ACT I A village … wherever.

A crowd gathers to await the arrival of the strolling players along with some circus performers. The leader of the troup, Canio, invites them to a performance later that evening. As he and Beppe prepare to join the villagers at the inn, one of them jokingly warns him against leaving his wife, Nedda, behind with Tonio. Canio's tense reply chills Nedda - that while he tolerates her infidelity in the play, should she stray in reality, the results would be tragic. Art and life are not the same, he says. Nedda wishes to be free of the sometimes brutal Canio, free like the birds to which she sings flying overhead.

Tonio, a hunchback, draws near, attracted by her song. But when he declares his love, she repulses him, at first mockingly and then angrily, finally striking him with a whip when he tries to embrace her. He slinks off, vowing vengeance. Hiding, he watches as she greets her lover, Silvio, one of the villagers. In a passionate duet, Silvio persuades her to leave Canio and run away with him. They agree to meet later that night.

Tonio has brought Canio, who overhears their parting words. Nedda delays him while Silvio escapes without being recognized. Tonio suggests that Canio bide his time, as the lover is sure to come to the performance and betray himself. Broken-hearted, Canio dresses and puts on his make-up for the performance, reminding himself bitterly that he is not a man - only a clown. In one of the most recognized melodies in opera, he declaims what every artist knows: I must play the clown even while my heart is breaking! ACT II Later that evening

The villagers gather and the play begins. Columbina's (Nedda) jealous husband Pagliaccio (Canio) is away, and after rejecting the advances of Taddeo (Tonio), she entertains her lover Harlequin (Beppe).

Pagliaccio returns and begins to question Columbina. Columbina's parting words to Harlequin as he runs off are the same as Nedda uttered to Silvio, and Canio slips from the pretended jealousy of Pagliaccio to his own real situation. Canio mournfully asks her how she can betray him after he rescued her from the street, gave her a life and loved her. His sadness, however, turns to fury as he demands her lover’s name. Nedda, breaking character, says that if he has already judged her, then throw her out. But she quickly recovers and tries to keep within the frame of the play.

Forced to confront the reality of the situation, she refuses to name her lover and is shot by Canio. Silvio, finally realizing that the players are no longer just “acting,” rushes from the audience, too late to save Nedda, and is also killed by Canio. Tonio announces to the stunned audience: "The play is over."

New York City Opera brings its legendary artistry to our stage with a 90-minute version of one of opera’s most beloved works, Verdi’s masterpiece Rigoletto, featuring Michael Chioldi in the title role, Brandie Sutton as his daughter Gilda and Won Whi Choi as the lecherous Duke of Mantua. The production will be staged by NYCO General Director Michael Capasso and feature narration written and performed by acclaimed Shakespearian actor and noted playwright Bill Van Horn.

Dubbed “The People's Opera” by Mayor Fiorello LaGuardia at its founding in 1943, City Opera continues its commitment to supporting great American talent, launching careers, and highlighting new and exciting artists with every production. We are so excited to welcome this historic company to the Catskills!

CURRENT COVID-19 PROTOCOLS WILL BE FOLLOWED AT ALL TIMES. https://www.governor.ny.gov/news/governor-cuomo-announces-new-york-state-adopt-new-cdc-guidance-mask-use-and-social-distancing. click on link for up to date CDC Guidance and Protocols.

PLEASE ONLY PURCHASE ONE TICKET PER VEHICLE, NOT PER PERSON IN VEHICLE.

All vehicles will be parked as they arrive, first come first serve.

You will be directed to a designated spot in your admission section for the concert.

Once parked your vehicle will remain in that space until the end of the performance.

Vendors TBD, check for updates. Info will be available on site on performance dates.

IMPORTANT.PLEASE READ THE CAR GUIDANCE GIVEN TO YOU WHEN YOU ENTER.

Trucks and vans will be parked on outside edges of their sections to avoid blocking anyone’s view.  No tailgating or sitting on top of cars, (visibility issues), during the shows . Lawn chairs will be allowed if CDC compliances permits. Please turn off cell phones and do not turn on engines or headlights during the performance unless there is an emergency.   Staff will direct you to an exit at the end of the performance.

PLEASE REMAIN IN YOUR PARKING AREA, (IN VEHICLE OR ON CHAIRS OUTSIDE)

AND FOLLOW CURRENT COVID-19 GUIDELINES. WEAR A MASK IF YOU ARE NOT VACCINATED AND NEED TO LEAVE YOUR VEHICLE TO USE THE PORTALETS. https://www.governor.ny.gov/news/governor-cuomo-announces-new-york-state-adopt-new-cdc-guidance-mask-use-and-social-distancing. click on link for up to date CDC Guidance and Protocols.

HAND SANITIZER AND WIPES WILL BE AVAILABLE.

The festival is a rain or shine event. Tickets are non-refundable.

All acts are subject to change without notice.

The performances will take place August 27, 28 & 29 at 300 Enterprise Drive in Kingston.  This site offers the needed space for social distancing and staggering of cars on a blacktop parking area.  As at a typical drive-in movie, the audience will drive right into parking slots, relax, and enjoy the show.  Sound will be provided through high-quality live speakers or through your FM radio, (station to be announced). Both the venue and the technology ensure that audience members stay safe in their cars while musicians, performers and staff “socially distance” themselves on stage, backstage, or while serving you. We are again grateful to Ulster County officials , town of Ulster and Blueprint for their encouragements and support.

There will be vendors, and joy... in a very safe environment where nothing will be done without monitoring and approval from CDC.